Click below to find the press and media resources you'll need to cover Keith Alessi's one man show, Tomatoes Tried to Kill Me, But Banjos Saved My Life. If there's anything more that you need, please don't hesitate to contact us!

'Tomatoes Tried To Kill Me But Banjos Saved My Life’ is a heartfelt passion project that began as an idea in March 2018, not long after a devastating life event caused Keith Alessi to think differently about his future.

In July 2018, after premiering at The Oggi Art gallery in Chicago, the show began its real journey to the stage at the Toronto Fringe Festival, then Edmonton AB, and finally Vancouver BC. The run started with small, but enthusiastic, audiences and ended with full houses and standing ovations.

It was clear that the show had a life of its own and was gaining momentum.

Reflecting upon the 2018 run, the Tomatoes Team realized how  important this show was. Very deep and personal connections were being made and the show was having profound effects on audiences.

Keith came to the realization that the more he brought his own personal walls down, and embraced his vulnerability on stage, the more people were moved.  The journey needed to continue.

In 2019 Keith entered ten Fringe Festival lotteries across Canada, the US, and the UK, and was accepted into eight!

The 2019 tour kicked off by winning three awards at the Frigid Fringe Festival in NYC, and continued to gain traction, winning awards, incredible reviews, sellout runs, and holdover shows in multiple cities along the way.  The year was capped off when the show was selected to participate in the Fringe Encore Series, Off Broadway, at the Historic Soho Playhouse in NYC.  The series featured 18 "Best Of" shows selected from Fringe Festivals worldwide.

Putting accolades aside, the most amazing part of the journey has been seeing how the show connects to people on a deep and personal level. There are many messages to take away.

Keith has had more hugs, tears and love in the past year, than in his entire lifetime. Emotional walls are being broken down. Truth is setting people free. The whole process has been deeply healing.

So, what’s next? Doors continue to open and intriguing opportunities present themselves. The heartbeat of the show is clearly being guided and the path is being lit. Follow the journey on our social media platforms and website.

Keith Alessi - Writer and performer, Tomatoes Tried to Kill me but Banjos Saved my Life

Before taking to the stage, Keith was well known as a successful public company CEO and college professor. He has led companies in both Canada and the United States.

Encouraged by others to tell his personal story of challenges and triumph, Keith wrote ‘Tomatoes Tried to Kill Me’ and has performed in 11 Fringe Festivals across Canada, the US, and the UK since July 2018.  And will be touring again in 2020.  (See details HERE)

A dual Canadian/US citizen, Keith splits his time between Vancouver, British Columbia and Virginia. He is a certified public accountant and received his MBA from the University of Michigan, Ann Arbor.

In his free time, he pursues his passions of flying and banjos!

Erika Conway, a Canadian actress, writer, director and producer is no stranger to the stage. Her 25 year career has included acting in multiple roles both on stage and in film/ TV including: Anne Frank: The Diary of Anne Frank, Beatrice: Much Ado About Nothing, Alma: Summer And Smoke, Mother: The Imaginarium of Dr. Parnassus, Dr. Lambert: Blackstone. Most recently she played Nyx in the new Canadian webseries, Necessary Evil, which premiered at the Edmonton International Film Festival in 2018, and which was nominated for and received numerous international awards.

Theater has always been Erika’s first love, and although acting and writing have been a major part of her career and life, she has been recently honing her directing and dramaturg skills.

In 2016, Erika wrote, produced and performed a one woman show  which began a new direction in her creative life. The desire to connect with authentic and meaningful projects ultimately lead her to expand her work on  ‘Tomatoes Tried To Kill Me But Banjos Saved My Life.’

Erika is delighted to have been a part of this compelling story since the beginning and is honored to be a part of this ever growing, deeply meaningful tour.

Here is her IMDB Page to find out more about her career in film.

Melissa has been in marketing since 2003 and worked with several well-known national media companies. She started her career at CBS Radio and managed the marketing for the largest radio station in the market, WBBM-AM. In 2009, she moved to television to oversee the marketing for Weigel Broadcasting Co., which included the launch of four networks including MeTV, Decades, Heroes & Icons and Movies! Melissa co-wrote 'Randos', a TV pilot which was produced by Zacuto in 2017 and is also a front end web designer. When she's not doing work for her clients, she likes to read romance and spy novels and write funny screenplays.

"The banjos represent a life he wasn't born into, but a life he chose for himself"

"Alessi’s inspirational and compelling tale will pluck at your heartstrings, clawhammer style."

"It has all the hallmarks of an uplifting tale..."

Global News - Edmonton - Pick of the Fringe! Click image below to see video!

"In the sea of what seems like a high amount of  one-person shows at this year’s Fringe, here’s one to put high on your list"

"Keith Alessi’s well-structured one-man show about following your passion is honestly delivered with a certain folksy charm I didn’t expect to find in a former top executive."

"Tomatoes Tried to Kill Me But Banjos Saved My Life is an intimate and affecting show."

"He performs with a genuine passion – the man sure loves his banjos! The message of the show is positive and inspiring, and is delivered in a compelling manner."

"Tomatoes Tried to Kill Me, But Banjos Saved My Life is a show in the true spirit of Fringe. The performance will put a smile on your face, leaving you glad and happy."

"An honest telling of one man’s journey.  Alessi’s performance manages to be warm, tear-jerking, and humorous all at once – a gem in New York City’s off-off-Broadway scene."

“You absolutely should see this performance.  It was raw and authentic and beautiful.” 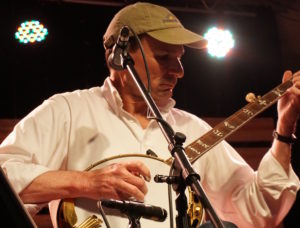